I have been thinking about how I can give myself a better chance of improving my Marathon times and think that my main problem is that I've been running my long runs too slowly. This is the most likely the reason for recent poor showings in the marathon as my training otherwise seems to have all the other keys for success. Well it could be my ticker but that's another story.


I picked this song as it pretty accurately reflects my mood right now. And in the spirit of foolishness I've signed up for another full marathon just 6 weeks from now.
Please tell me I'm wrong but Nagano is too tempting to turn down and frankly I feel fine and reckon I could do a marathon this Sunday.
Posted by Samurai Running at 2/23/2007 04:15:00 PM 7 comments:

Thanks for the well wishes I can really benefit from your thoughtful comments. I was thinking to write a detailed report on the marathon today but it might be better to
leave it for a while as it will take sometime for me to put it into proper perspective.

Anyways, I will give you my splits which you runners will understand tell their own story. By the way a got a few more minutes due to the actual time being faster than the gun time cause it took some time to cross the starting line. I'm pretty pleased with them in that they are somewhat consistent albeit slower than I was aiming for.

"shoganai" in Japanese means roughly "what are you gonna do? You just have to put on a brave face." Well that's exactly what I've got to do. Did 3:28: about 8 to 15 minutes short of what I hoped for.

I thought I was running well enough today to PB and up until the end I ran pretty even splits, but because of the crowd, 30 thousand + runners, it was a sight to behold, I lost a lot of time in the first 10 Kms until I could get some room to move.

It was bloody cold and it didn't stop raining until about 1k from the end so this also contributed to slower times all round. Stephen was not a happy chappy either as he didn't break 3hrs and got 3:08：Again "shoganai." We will be back.

I left Stephen at a party as I didn't feel much like partying and I took a train home. Four hours later I'm home so I though I'd just write briefly about the day. Will go into more detail later. Thanks for your support as usual. By the way Stephen is, as expected, a terrific bloke and it was great to meet him face to face.
Posted by Samurai Running at 2/18/2007 11:49:00 PM 8 comments:

Well the last before the marathon anyways.
I'm going to leave Saturday afternoon and take the fast train up to Tokyo.I'll meet up with a friend and go and pick up my race kit before some dinner and back to the hotel room for a hot bath with a couple of cold coronas and and early night.

Looking forward to the weekend but can't say I'm not a tad nervous. My shins are still both sore to the touch, yes I won't touch them, and my Achilles are also a bit suspect. If I don't do as well as I want it will be because of these, but on the positive side they haven't been bad enough to stop me from training and I have never had an injury prevent me from finishing a marathon before. Actually any prior injuries have all seemed to disappear when running the marathon funnily other injuries and tiredness seem to come up and trump the old pains.

I'm going to meet our friend Stephen Lacey too for the first time which I'm looking forward to too.


I see that there is a chance of rain for Sunday's marathon so I'm going to post an old favorite, One Fine Day, it is also dedicated to my favorite coach who has, strangely enough, the same name as the singer "Pat Carroll." I wonder how many times Pat has been asked to sing this at Karaoke.
Posted by Samurai Running at 2/13/2007 09:29:00 PM 6 comments:

Thanks for the comments about music, I reckon I'll try it while training but not during any races for now. Today I did 4kms at race pace which is going to be 4:37 per 1K. Found that I really couldn't keep the pace I was running 15 to 25 seconds too fast.

Somehow I have a lot of trouble holding pace either too slow by far or too fast. I think I'm going to set my watch to beep at 4:37 invervals and try to keep strictly to running 23:05 for every 5kms. I know I'm able to run faster but even ten or so seconds faster per K will hurt me in the last 10K. Anyway I'll try to be disciplined
this time and if I feel I've got something with 7K to go I'll push it a bit faster. We'll see but this is my 6th full marathon and I'm yet to finish with much in the tank.

Also Clairie and Tesso have now "tightened the screws" , nice discipline metaphor hey Stephen,with such fine races on the weekend. I'm going to have to be hurting real bad in this one before I give up on my goal. Thanks girls.
Posted by Samurai Running at 2/13/2007 11:57:00 AM 6 comments:

I heard part of tapering is to get your mind off stressing about the race so I was thinking about running with some music. You know it may sound strange but I've never done it so I'd like to try. Do you all listen to music when you run? Do you think it helps and in what way? I know some people don't care for it what are your views on this?
Posted by Samurai Running at 2/09/2007 06:01:00 PM 13 comments: 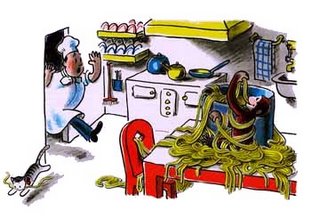 You would all be happy to know my lovely wife is including me in meal times again so all offers of food baskets, although appreciated, are now no longer needed. While on the subject I'd like to know if you have any carbo loading secrets you would like to share?

I heard of one way that I tried before a training run but never in a race. It worked well! I ate basically no carbs for two days and the day before my run I loaded up only eating high carb food for breaky, lunch and tea. I felt switched on for that run and flew through 18K with the type of energy I rarely feel. So I'm going to try this again for Tokyo and hope it can make up for the gaps in my training.
Posted by Samurai Running at 2/06/2007 08:13:00 PM 7 comments:

The last of the long runs ran

Did the last of my long runs yesterday. It was about 30K on the streets around my local area. Not too easy as there were a few long hills in there but ankles behaved and although a real slow run, nothing under 5min per K, I feel it did me some good.

Now I'm just going to concentrate on my speed sessions, pump out a few black ones, like Ewen says and visualize like Clairie says. And keep my fingers crossed for a day weather wise like today. A deep dark blue sky, no wind, and 14 degrees, very mild here for this time of year.
Posted by Samurai Running at 2/05/2007 11:06:00 AM 9 comments:


Time for my song of the week. I've recently been listening to Joni Mitchell and I saw a recent interview were she says she's blocked and can't write songs anymore.
She puts it down to the present time which she says is "unromantic and shallow" and she calls songs on the radio today little more than jingles around which commercials fit. I can't really argue with her as I don't see much soul and romanticism in recent music. Having said that I see this beginning to change and I'm more than happy to be convinced otherwise.
Posted by Samurai Running at 2/02/2007 03:05:00 PM 5 comments:

Had a hard run yesterday. Went to bed Tuesday night with a ticklish throat and a little phlegmy. I was thinking here we go old Murphy's law is coming into play again.

On Weds morning I didn't feel any worst but I was feeling tired with a small headache. Anyways I did my scheduled 90 min run and shuffled all the way. I didn't have the energy and my bloody ankles were hurting again. Didn't get above 130BPM the whole run. Still after I finished I felt pretty good, no more pain in the ankles and minus a fair bit of phlegm, excuse me ladies.

Last night I had and early night and woke up this morning feeling fine. What is that?
Well, with that shock behind me I moving forward with all fingers and toes crossed that I can remain healthy and injury free for two more weeks at least.
Posted by Samurai Running at 2/01/2007 08:36:00 AM 6 comments: