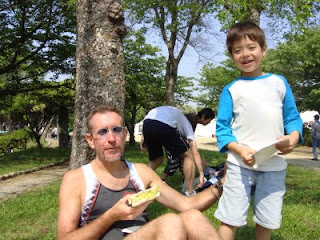 Above, resting with an egg sandwich after the todays race. "Living Large!" ;)


Good race today. Beautiful weather, you couldn't buy a cloud, 21 degrees with a cool breeze. Did 37:24 my 3rd fastest 10K. Although it's not a PB it is five minutes faster than my time on this course 3 years ago, and I didn't do any specific training going into this race. I'm certainly a better runner than I was. Next goal for the 10K is sub 35 mins in a race in November.

I don't know how far I can get my 10K time down at this stage of my running career but I'm starting to realize that this game is to a large extent limited by the mind so I'm going to look for examples of better runners,(there are plenty of them), convince myself I can also do that and continue to improve.

I start my 12 week preparation for Townsville marathon on May 4th. This will require some "wanting, needing and bleeding" and of course "putting in the time" but I'm happy to do it. This time around though I'm not going to put pressure on myself to break 3 hours in Townsville I'll just do the training in a "Zen" kind of way focusing on completing the day to day requirements of my running, nutrition (last weekend of deep fried grilled cheese sandwiches for a while, see below) and exercise plans and I'm sure the race results will take care of themselves come August.

Hope this finds you well. 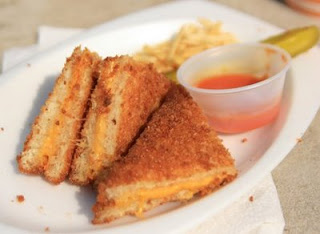 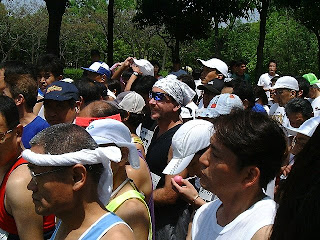 
Tomorrow, Wednesday, a public holiday here, I'll be running a local race. The Sakai-City Marathon. They have a few family runs and 2 10K races, one for anyone up to 44 years old and a "Masters" for those 45 and over.

I'm not expecting to PB this course but it will be interesting to see how I go in relation to 3 years ago. I remember talking to a young American boy at this race in 2006, we were the only foreigners running, and his goal time was 36:00 minutes, I thought at the time "Wow people can actually run that fast?" Now I'm capable of times like this but as for tomorrows race I'll be happy to get out there and run better that I did here in 2006.

By the way, Amazon just delivered a book I ordered by Earl Fee, Speedygeoff talked about him a little while back. He is a 80 something world class master runner. The book "The complete guide to running" "How to be a champion from 9 to 90" is a cracker. I'll share some of its wisdom in the coming blog posts.
Posted by Samurai Running at 4/28/2009 09:42:00 AM 6 comments:

So you pretty much all think I should give the comedy a miss. I'll take that advice, for the most part, but it's going to be hard ;)

I wanted to get back to the standard blogging today but I came across something that made the hairs stand up on the back of my neck. You all know this guy, right?

I kept thinking "Now where have I see this shot before?" and it hit me!!! 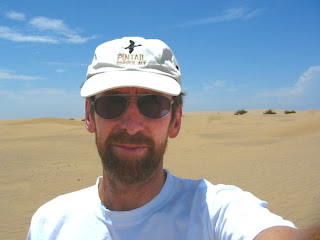 The resemblance is spooky, isn't it?

Anyone looking to buy Ewen a Chrissy present look no further. Poncho and/or wide brimmed hat!

Not too much happening here with me, slowly getting back into the swing of full time teaching again after a nice spring break.

While I was on holidays I was playing up a bit, nightclubbing and the sort. My wife wasn't real happy about this as I often got so drunk that I came home with "throw up"
all down the front of my shirt.

It got to the stage that my wife said if you come home late again with vomit on your clothes "I'm going to leave you!" Well that made me take notice so I devised a plan for the next time I got para and chucked up on myself.

I simply placed a 1000 yen note, about 10 dollars, in my front pocket and when I again came home, covered in sick, I quickly pulled it out and told my wife. "Look honey, someone else threw up on me and they gave me this money to pay for the dry cleaning costs."

It seemed to have worked when my wife noticed another 1000 yen sticking out of my other pocket. "Well what's that for!" she screamed.

"Oh that" I said "That's from the guy that shitted in my pants!" 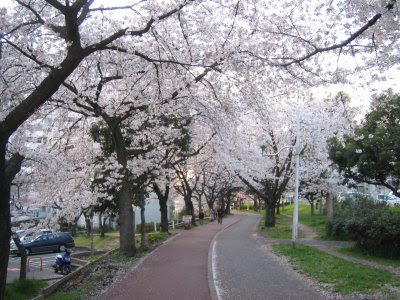 Into "Cherry Blossom" season now over here. Above you can see a photo of one of my running paths lined with cherry trees in bloom. It makes the world of difference running in the pink, so to speak.

As it is spring, a time of renewal and new plans, I've been mapping out a plan for the coming year. At the end of this month I'll run a 10K as fast as I can and then settle into 12 weeks of marathon training that will take me to the "Townsville Marathon" in beautiful far north Queensland Australia on August 2nd.

There aren't any good races close to here from mid May until early September so I'll simply train for the marathon in Australia, take one month off after that and start running in earnest for the fall/winter racing season here. I'm thinking of a 10K in Oct, a Half in Nov, and a full in Dec.Early next year it will be the same build up to another marathon in Feb 2010 and again a few more races culminating with another full in April 2010. Exact locations I'm still thinking about.

Anyway I'm going to race as much as I can in the next 2 years to take advantage of my "peaking" and then try to hold it until at least 50 and reassess things then.You might think I'm getting ahead of myself but I'm the type that likes to plan and believe it or not am now even looking at which newspapers I will subscribe to when I retire at 65 ;)

Back to 2009, I'm glad to have another crack at a marathon before my B'day on August 16th when I'll turn 45. This race should finally rip that my sub 3 hour monkey off my back, and then I'll be looking at going as low, time wise, as I can.