OK some details from todays race. Time 1:20:03  Not bad considering, see video IMG 0610, feel ready to PB in Osaka in 3 weeks.  Thanks as always for your support, mails, tweets etc. 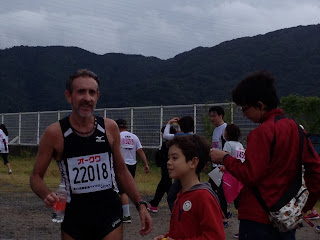 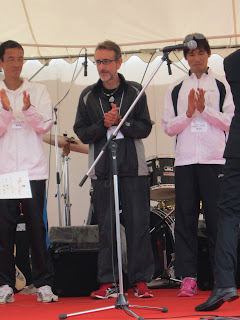 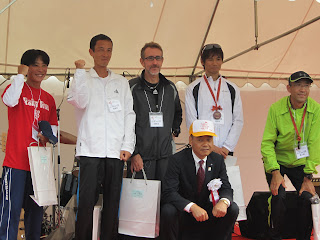 New episode of "Running in Japan" I'll put up a more personal post shortly but just to let you know everything is on track for the Osaka Marathon and I remain injury free!

Lastest episode of Running in Japan with J R a beginner runner and fellow ex-pat.


I think the combination of the half mara on Saturday and the 3000m track race on Monday with the 100 mile week enabled the sinus infection to take hold. I've pretty much had sinus problems since my early 20s but the last 5 years they seem to be recurring with a greater frequency. Two a year on average now.

If there are any runners who also suffer with sinus please let me know as I'm still not sure what brings it on and how, if possible, to stop them from happening. This latest one was no fun at all, I had a phlegm blockage that had my nose looking like Arnies' in that scene from "Total Recall" when he was trying to pull that tracking device out of his nostril (see below)! 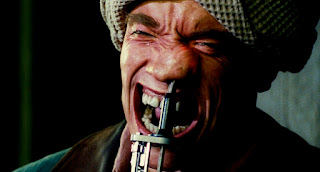 Anyway, back to the training this afternoon.

Starting to smooth this out. A work in progress as Kevin said but it's got potential. I'd like to bring in a bit more humor but hopefully that will just come natural as I relax a bit more and the two of us build some rapport.

Any advice on what we can discuss and or anything you think might help would be appreciated.

Think I'm coming down with something, cancelled my second session tonight.

Did my first 3000 meter track race today as part of the events associated with the "Sakai City Olympics." Actually I've never raced on the track and think this is due to a couple of reasons. Firstly haven't had the opportunity but mostly it's cause the shorter distances freak me out, and hurt.

While I don't really bat an eyelid running a fast 3K on the road, 3000 meters on the track does my head in for some strange reason. Anyway I think I should try to do much more track racing. I could be wrong but I think our friend in Ireland "Beer Matt" from "Marathon Exploits" once blogged that it was only after starting to run regularly on the track that his distance times started to come down significantly. 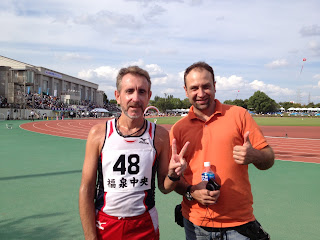 I guess if I do the same the fear factor will diminish and my times will start to come down too. Got any thoughts on racing track? And my first attempt at 10:25:51 ? I was disappointed with it and thought I could have gone a lot faster today, but simply couldn't. Anyway what doesn't kill you as they say.....Blah blah blah.

Did the half marathon with the Kansai Ladies Marathon club today.  Pretty good run for this time of year, was 28 degrees when we finished. At this stage of my build up I simply needed to get the body used to marathon race pace which I pretty much did.

My time 1:21:58 is over what I will be wanting to run in the Osaka marathon in 8 weeks but feel that by that time, with the extra training and atmosphere of Osaka and the cooler temperatures, I shouldn't have too many problems running a little faster.

I think today I would have run faster but I was running on my own the whole way. The fast leaders took off and the few that were with me dropped back in the first few Ks. I wasn't looking at my watch and couldn't rely on the group to help me move along. This will not be a problem in Osaka. I expect to latch on to a speedy group and hang with them!

On Monday, day after tomorrow, I'll race a 3000m on the track and as Ewen said I'll have to be careful not to pull a hamstring trying to out kick some younger dude, but if I can put in a decent time it will be another positive for Osaka.