I'm off work for a few days now, enjoying the fine spring weather and planing the race year ahead and beyond. Been looking for reasons to help me believe that I'm capable of what I'm aiming for and I think I found a few. While going through some old papers I picked up from my Father's house when I went over for the funeral I found my Great Grandfather's Scrapbook. "George Brown" was my Father's, Father's Father and as it turns out a bit of a Renaissance man.

George was an artist, making statues and whatever out of wood, some of the best work of its kind in Australia, a boxing enthusiast and a foot racer of some note. 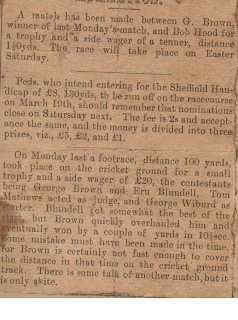 So if anyone says I don't have the pedigree I can tell them otherwise ;) Now this puts me in an awkward position that if I can't reach my lofty goals it must be because I have a small heart/sack. Excuse to those eating ;)


Yes old George Brown was fast, in 1887 he won the "Stawell Gift!" For those that have never heard of it, it's present website describes it thus:

George won that race under the name "J" Brown his kid's name and family legend has it he won twice more, once under another name and once with a large red beard but was found out and scratched. Well, there was a lot of money in those days, relatively speaking, for racing and although the Brown's are known for their honesty and are generally decent folks, they are certainly not angels ;)
Posted by Samurai Running at 5/02/2010 06:11:00 PM