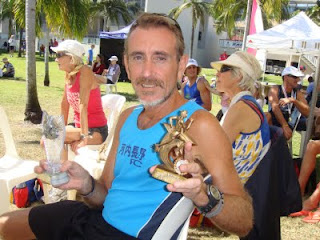 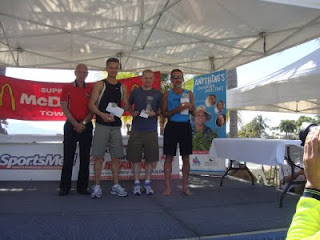 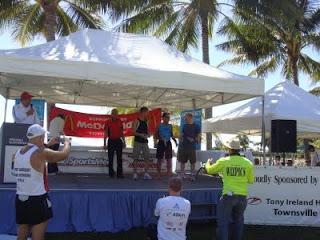 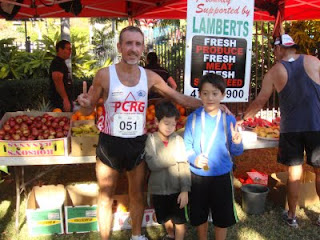 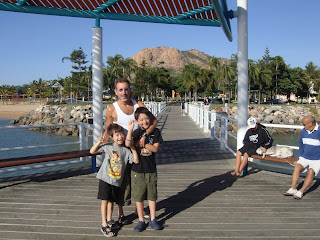 I can't go into too much detail as I really wasn't paying that much attention. You all probably know what I mean by that. Anyway I think I'd better get what I recall down now while it's still relatively fresh.

The race started at 5:30am, it was pretty dark, I set off with a group of about 8 guys that kept together for the first 5K going through in just under 20 minutes.
Even at this stage Dave Criniti and Alan Mullen the first and second place getter's were way ahead of everyone.

Allen Mullen a previous winner(2004, 2:40:25)trailed Dave by about 3 or so minutes at this stage but Dave was really flying. (You really have to see this guy run, it is really something else.)This day he was to break the course record going under 2:30:00.

Anyway, by the 10th K or so there was a smaller pack, about 4 of us, following the leaders and we were all running comfortably under 3 hour pace. I mentioned to the guys around me that: "This race would be perfect conditions if it was just a little bit less humid." I got no response and these guys were sweating a lot so I took it as a sign that they were doing it a bit harder than me. Nothing like training in 95% humidity to make 75% seem cool.

By the 20th K there was only me and a fit looking thirty something local battling it out for third place. I started to talk to this guy and found out it was his first marathon. I said, something like "jeez you are doing well, if you run your first one like this you have a good future in this sport." Not long after I said this I pushed the pace knowing that if I didn't put a gap on him now he might very well hang with me and find his second wind.

Luckily for me and thanks to my high mileage training I was able to move ahead knowing with confidence that I could hold this pace. The last 10K I was easily holding 3rd place and the encouragement from Allen and Dave whenever I saw them on the turnarounds helped me to hold on and bring it home without any major dramas.

I was passed by a couple of very fast half marathoners and about five 10K runners in the last 8K, but this helped me as I was forced to wake from a little lapse in concentration and pick up the pace a little. I'm not sure whether or not I did pick up the pace, I was beyond checking K markers at this stage, but I didn't drop off significantly like I usually do and was very pleased to not only come in under 3 hours but to do it with a third place finish.

I'm in two minds now. One, I think I trained long and hard for a 2:56:00 finish, maybe I should have run faster and that is about all I can expect in the future. But that's what I said when I ran my first marathon in 4:10:00 something. And I'm thinking, now I can go faster and with you guys to help me I'll always be able to find ways to improve my trainng and times.

Thanks Dave for your support online and on the day, you are a true gentleman. As I have found of 99.9% of runners and bloggers. It may sound a bit melodramatic but I'm indebted to you all and grateful, more than I can say.

I'll leave you with some photos all pretty self explanatory.

Starting running and aiming for a sub 3 marathon has been a life changing experience. I have no regrets I did this. Now with a bit more balance and sense I expect it to continue to give. I will continue to do it as long as I believe it is worth the effort and is enjoyable. Frankly I can't see the day it won't be.